Governor Charlie Baker signed off on a new law titled “An Act to Establish Pay Equity” early last month. This has been created in order to revise a previous law, which was derived from the court case of Jancey vs. School Committee of Everett. The rulings of the Jancey case paved the way for litigation to be brought against an employer on grounds of gender pay inequality. The guidelines for doing so were set in place with a two-part test, to be decided by the judge. The first part of the so-called “Jancey test” is to “determine whether the substantive content of the jobs is comparable, that is, whether the duties of the jobs have ‘important common characteristics.’” The second part of the test is then to decide “whether the two positions entail comparable skill, effort, responsibility, and working conditions.”

The result of this two-part test was that pay equity cases became very difficult to win. In order to be seen as comparable work, the two positions had to be practically identical. Therefore this new legislation states that positions are considered comparable when they are substantially similar in skill, effort, responsibility and working conditions. By disposing of the first half of the Jancey test, there is an opportunity to broaden the existing definition of what positions are comparable. 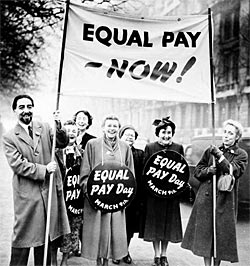 THE FIGHT FOR EQUAL PAY FOR EQUAL WORK IS NOTHING NEW. IN THE 40’S AND 50’S WOMEN IN VARIOUS UNIONS COULD BE SEEN PROTESTING FOR THE RIGHT TO RECEIVE EQUAL PAY FOR DOING THE SAME JOBS AS THEIR MALE COUNTERPARTS.

In addition, this new law prohibits employers from requesting a salary history. This will hopefully decrease the chances of having a past prejudice be carried into a new workplace. The biggest change for employers is that they will have to carefully examine what questions they are (and aren’t) including in their interviews. Although an interviewee may still volunteer this information, it will prohibit the employer from demanding a disclosure of salary as a requirement to be considered for a position. The law also disallows employers from restricting their employees in what they can and cannot discuss in regards to their salary. In time this may lead to employees having more open conversations about salaries, further encouraging employers to create gender pay equity amongst similar positions.

It is important to note that there is an affirmative defense included in the Pay Equity Act. This states that the employer must have “both completed a self-evaluation of its pay practices in good faith and can demonstrate that reasonable progress has been made towards eliminating wage differentials based on gender for comparable work” within the past three years of the allegation. Since the new legislation won’t be in effect until July 1, 2018 there is time for employers to take necessary steps to protect themselves.

The Law Office Of Bonville and Howard has been serving clients in Massachusetts since 1947. Our law firm is conveniently located in Fitchburg Massachusetts and is steps away from Fitchburg District court. We are located minutes from Leominster District Court, Worcester Superior court as well as the family and probate courts in Both Worcester and Boston.